Catching up on SAL and fabric bleeding issue 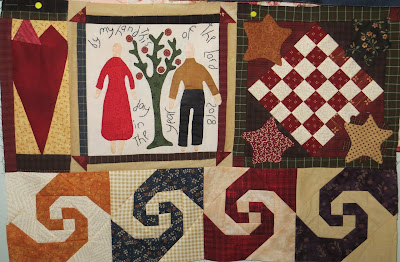 Today is the monthly link up for the Sweet Land of Liberty SAL from Lori at Humble Quilts.  I made the heart, couple, and checkerboard blocks when I first started this quilt (many moons ago) so all I had to sew was the snails trail blocks.  (Which I didn't make until yesterday. . . )

I wanted to progress on this quilt so I chose to do the block that goes underneath the snails trail.  It's not finished but I made some headway.  I didn't put the doves close enough together to get the cherry stems to cross.  But, I wasn't going to do them over.  The original block has victory written on its bowl.  The doves said, "Peace" to me, so that is what I decided to write.  It hasn't been pressed yet. 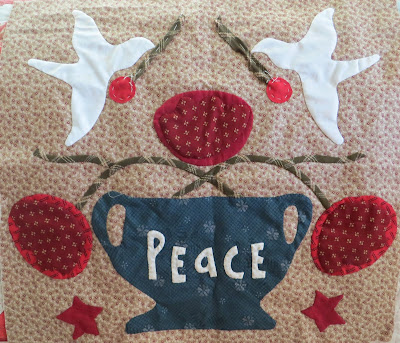 I've been working on the Roseville quilt too.  Or you could say I've been re-working the Roseville blocks.  When I rinsed out the water-soluble marker from this block the red fabric in the stems bled profusely. 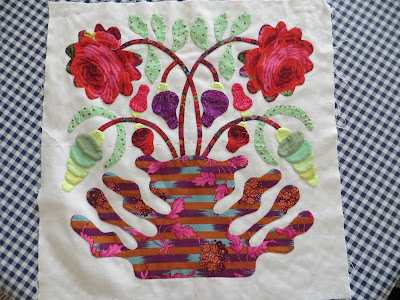 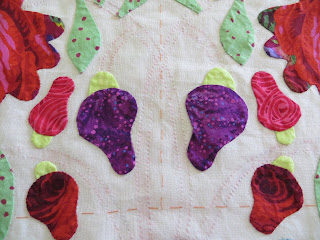 But, you can see the bleeding very well from the back in the next two pictures. 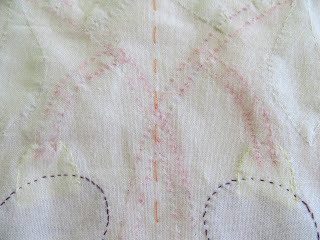 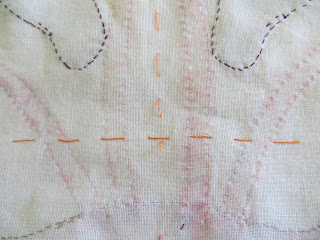 I read somewhere that bleeding isn't necessarily caused by fugitive dyes - sometimes it's caused by over saturation of the dye and if you just continue to wash it - eventually the water will run clear.  So I took the piece of fabric and washed it.  (I had pre-washed it but evidently I wasn't very vigilant.)  It took 7 times before the water ran clear.

I checked out the rest of the quilt to see where I have placed this red Kaffe fabric because I figured I would want to unpick the parts and replace them.

I unpicked the stems (of course) and replaced them with brown.  I have brown stems in all the other blocks.  I don't know why I suddenly decided to make the stems in that block red.  As it turns out, I like the brown stems better than I did the red. 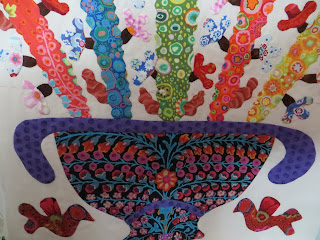 So, I need to replace the bird bodies on these two little birds and the large red tree in the top panel below.  While I'm not too excited to do this tree over again, I'm grateful that it isn't one of the wavy trees from the bottom border and that there isn't any more red pieces in my blocks that I need to replace.  This is very doable. 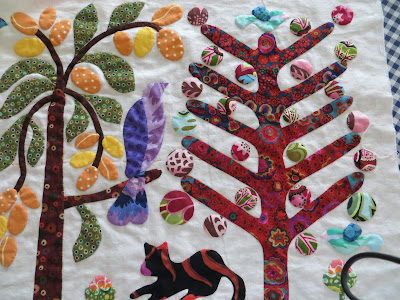 I've been sewing at a friend's retreat the last couple of days.  We are going to meet to sew again this morning.  I've been assembling a quilt from the "Rising Sun" blocks I hand -pieced last year.  It's turning out so nicely.  I'll take pictures when it's done.

I am enjoying the lovely (hot) summer weather but am distressed to hear about all the wildfires.
I pray for the fire fighters.
Robin
- June 29, 2018 9 comments:

A really big sigh of relief 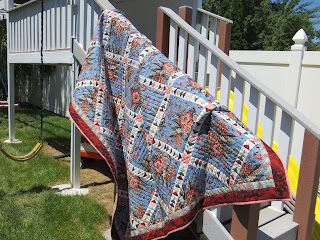 I finally finished the Chintz quilt.  I pieced this quilt in 2011 and started hand quilting it last December.  I've been working on this while also working on the Roseville Quilt and sewing along with the Sweet Land of Liberty Quilt.  I'm afraid this quilt didn't get as much attention as the other two or it would have been completed long ago.  It got a little boring quilting the same shapes over and over.


It is 87" square.  Here is is upon my long grass.  It makes the borders wave.  Maybe they are waving at you - thanks for coming. 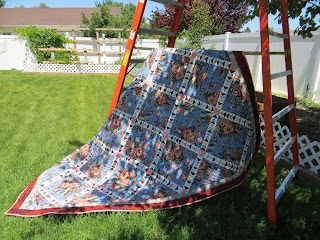 I was going to hand quilt a small cable in the burgundy outer border and I found just exactly the right template but it looks fine and I want to be done.  The coral/peach colored binding matches really well but it looks a little odd in the pictures. It is the same fabric I used for the cornerstones.  I only had two pieces that were big enough to use as binding.  The other one was a light background (you can see it in the flying geese units).  The coral/peach fabric looked best. 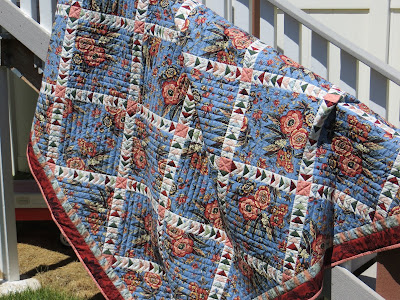 The extensive quilting really shows up in the picture above.  I used wool batting.  It was very easy to hand quilt and the quilt itself is a lot lighter than one with polyester or cotton batting.  My only concern at this point is to make sure no moths get to it.  I think I'll store it away with bay leaves or lavender or something. . .

The quilt is only my 2nd finish for the year.   You might think I wasn't doing much but I'm doing hand work constantly.  It all adds up eventually I guess.


We took a trip to Arizona a week or so ago.  It's the first time in 45 years we have taken a vacation without any kids (unless you count the 18 mos. we spent in Wisconsin on our mission).

We were at the canyon at mid-day so the pictures are a bit washed out. 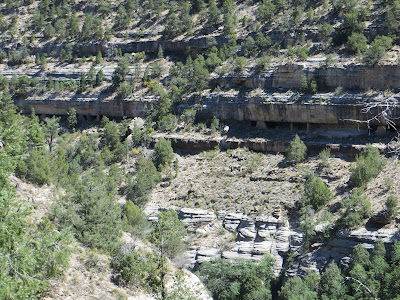 We also visited Walnut Canyon and some cliff dwellings.  We were even able to climb through a few. 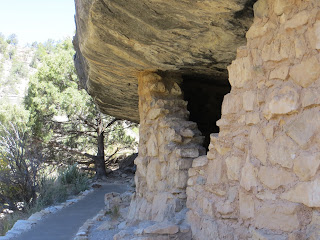 Then we had our grandchildren from Florida come and stay for a week.  They were so fun but I'm still catching up on my energy level -whew!

Hope you're having a great summer,
Robin