I finished getting the little outside blocks appliqued for my Fall - ish quilt.  I really have a new appreciation for all of you who did the 365 Quiltalong.  Those circles are tricky.

I sewed them on the outside of the four inner blocks.  I think they are kind of cute.

It needs another border or something, I'd welcome any suggestions.  But, I'm in no hurry so maybe I'll just hang it in the closet until I get some inspiration.

What a sweet and generous gift. 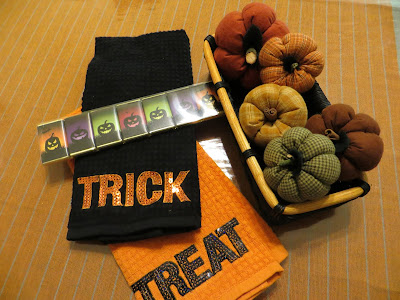 I am so delighted by this gift of homemade pumpkins and Halloween treats that I received in the mail yesterday.  They are from the "Queen" of all things pumpkin, Wendy Kirby from the Quiet Room.   And here too.  She has boxes and boxes of pumpkins that she puts out on display each fall.  Go read her blog and look at her creative and wonderful decor.

I was commenting that I didn't have enough pumpkins to decorate with and that I needed to go shopping with her some time.  She replied by sending 5 pumpkins in a cute basket, chocolate, and trick or treat towels all the way from England!.  The lettering sparkles and you can see it reflect the light on the "K". 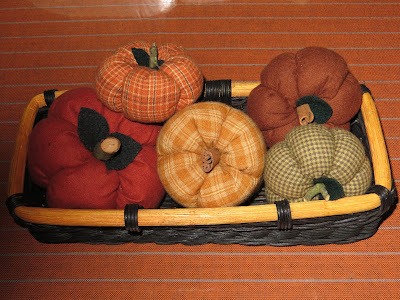 I can't quite decide where to put this little basket of autumn goodness.  Should I put it on my dining table on top of the orange tablecloth? 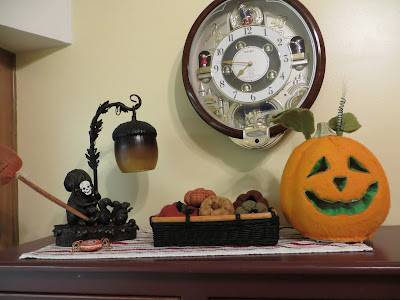 Should I put it on top of my piesafe so the squirrel with the skeleton mask can guard over it?  No, no, there's too much competition with the clock. 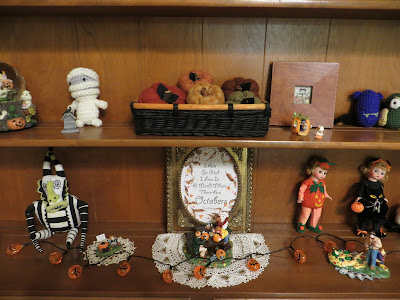 Should I put it with some other seasonal decor on my hutch.  (Can you tell my grandchildren did the decorating this year?)  No, no, there is too much clutter there.

I put it back on the table where everyone can see it as they enter the room. 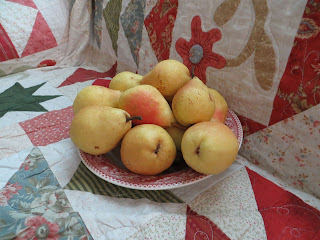 My youngest daughter shared some pears she had been gifted.  They were a little green so I put them in the refrigerator until I had time to do something with them.  Later I set them in the middle of the dining room table till they ripened.  Aren't they pretty?  Since I had more than we would probably eat and not enough to bottle - I decided to dehydrate them.  They are so sweet and chewy - yum! 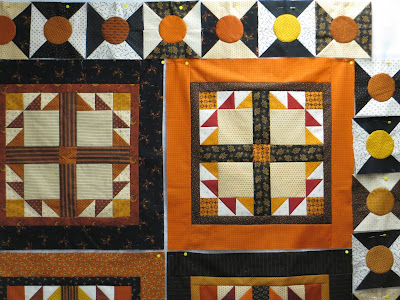 I've finished 20 of the 32 border blocks I need.  This picture gives an idea of how I'm going to arrange them.  I think this quilt will need at least one more border before it tells me it's done. 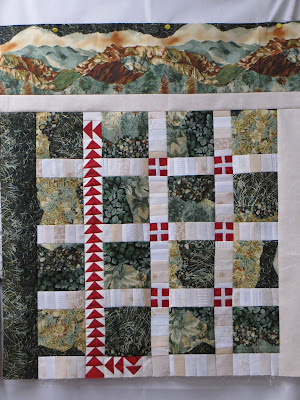 I worked a little more on the Adhoc- Improv challenge of using "maps" as our theme.  I sewed the top and two side borders on.  I added six little Swiss flags since this is a map of the neighborhood my great grandparents lived in and they immigrated from Switzerland.  I think I will label the streets next and put in the some directional labels as well. 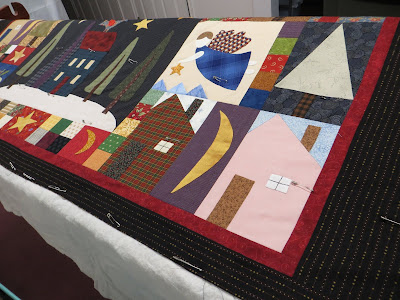 I finished the "Sleigh Bells" pattern by Jan Patek.  It is #12 on my UFO list.  So, I have completed 5 of my UFOs to the flimsy stage since September, only 10 more to go. The middle of this winter quilt has been done for over a year and just needed borders.  I finally found a dark fabric I liked and put the borders on yesterday.  The black piece has tiny gold stars and a red design in it.  I put it on the frames this morning.  I'm already to start the quilting but need to find a marking pencil that isn't too thick to go into my stencil.  I have all kinds of marking pencils but no white ones that will work. 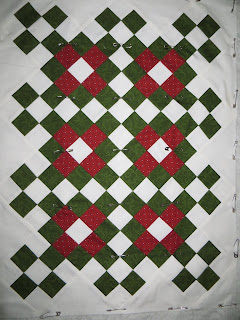 I pin basted this little quilt that's been waiting for years.  The pattern is by Cheri Payne.  I just wanted something  mindless to work on while I watch TV.  It should be done in no time. 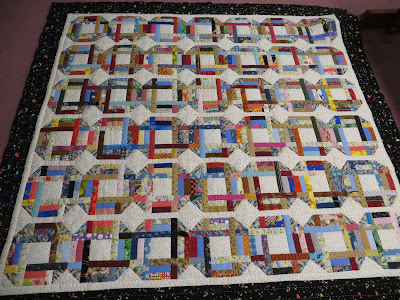 I finished "Big Stitching" the Slap-Dash quilt.  It was truly a scrap quilt.  I even pieced the batting. 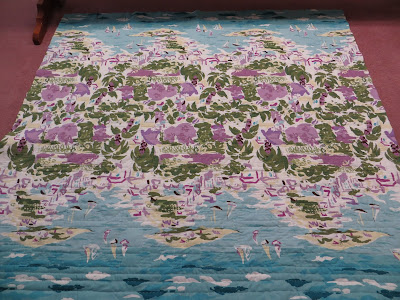 I love the whimsy of the fabric that I used for the backing.  I picked it up on clearance a long time ago.  I knew it would come in handy at some point. 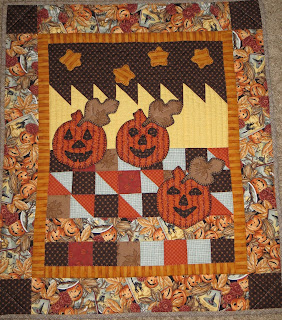 And now, a couple of my favorite Halloween decorations.  The one above is my first small quilt or wall hanging.  It is a pattern by Thimbleberries.  It's about 15 years old.  You'd have to see it in person, the colors are just so nice. 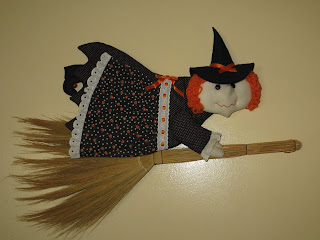 And this sweet witch was made by my mother in the 80's.  She flies over all our Halloween festivities.

Hope your day is bright and sunny and you are able to find time to create.
Robin
- October 19, 2018 5 comments: 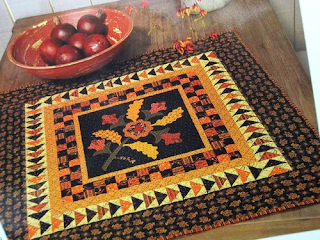 A number of years ago I saw this little quilt by Jo Morton online and couldn't forget the colors.  They were so rich.

I looked for the pattern and discovered it was from Quiltmania but by the time I found the picture it was way past time to get this issue - drat!  I could have ordered one from France but that seemed a little too pricey.

In the meantime, Kathleen Tracy at A Sentimental Quilter  had a free pattern for a quilt block that I liked so I decided to make it using similar Jo Morton fabric. 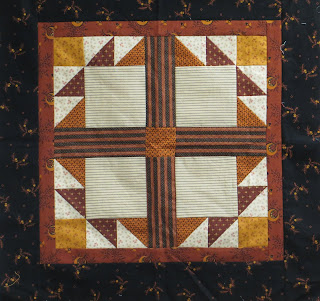 I  liked it a lot.  It looks much richer in real life.  In fact, I liked it so much I decided I wanted to make a whole quilt of this block.  I collected fabric that related to autumn but not so much Halloween.
And then. . . . . . .

I put the block, the pattern, and the fabrics (so pretty) in a bag and stuck it in a closet for over five years.  I love to age things - like cheddar.  I tasted some 10 yrs old cheddar when I was in Wisconsin and it retained it's flavor but mellowed somehow instead of getting more sharp.  I found some 25 yr. old cheddar but it was more than I wanted to pay.  But, I digress~

Last  week I was floundering in my sewing studio because I didn't have anything to do.  The room is full of fabric and patterns and inspiration but I had completed four UFOs and even though there are many more waiting completion, I wanted something new.  I couldn't concentrate on any one thing.  I finally decided that I would make something seasonal and so I began to hunt down the Kathleen Tracy block project.

I thought I knew exactly where it was - but I was wrong.  An hour and a half later I found it on the floor of the fabric shelves, almost right in front of my eyes.  I was rather peeved because I could have spent that hour and a half sewing - grrrrrr.

Anyway, I decided to make 3 more blocks like the first one and sew them together for a center medallion, sorta, kind of.

I made one with an orange border. 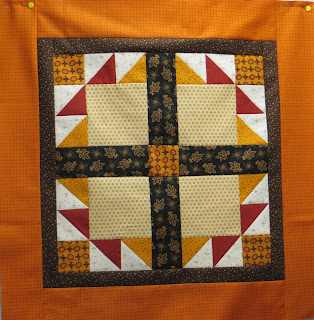 It looked terrific too.  A few days latter I made another block with an orange border.  I was tempted to stop here and just make a table runner. 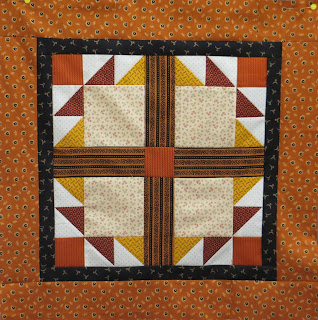 But, after thinking about it for a while longer I made another block with a black border. 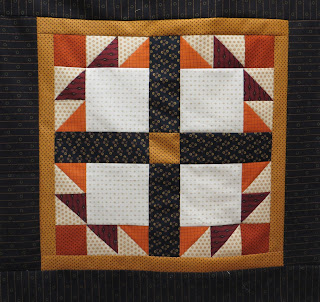 And hung them on the design wall. 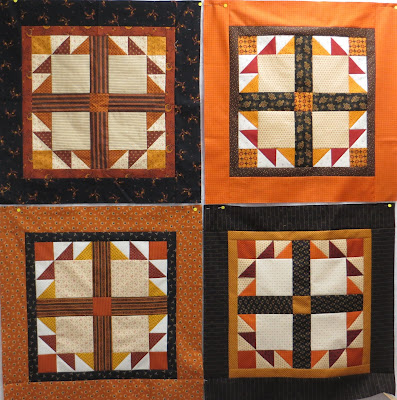 It makes me happy.  I was going to sew them together but my iron started leaking buckets (it's only 3 months old)  and I need to replace it.

What is it about irons?  I need to go to the store AGAIN.

I came up with an idea for a little 6" block to go around the center squares.  It's an hourglass block made with HST blocks instead of quarter square units.  I am going to applique circles in the middle and set them alternately around the outside. 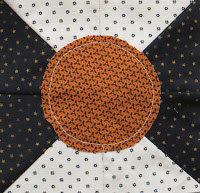 This block has some whimsy in it.  It kind of reminds me of a clown costume or something.  I need to make 32 blocks.  I have the HST units sewn and calling to me from the studio.  I was just going to sew on something till the muse found me and instead I found it. 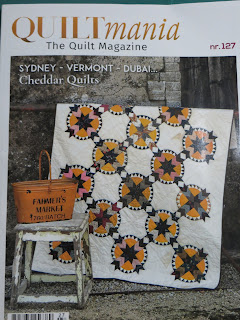