When I first decided to join in this SAL I knew that there were a few blocks that didn't strike my fancy and I would probably do something else in their place.  The freedom angel was one of them and the fairy angel was another.   I have been looking for ideas all year long and have come up with a few good ones.

Here is a link to my pinterest board to see some of the other ideas.

I ended up putting the hand with the heart in the palm (from the top border) instead of the freedom angel.

I misplaced the papers that had the fish block and the remembrance embroidery so I came up with a little basket of fruit that says "land of plenty". 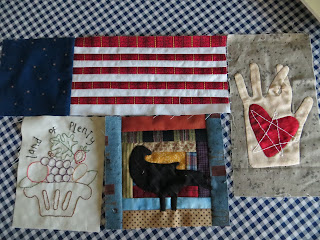 I've been looking through a lot of my old quilting magazines to try and come up with an idea for the ADHOC IMPOV Challenge of maps when I accidentally came across  a pattern for a trumpet.  I left the valves off so it would look like a bugle.  Perfect for the fairy angel block.  A bugle is as patriotic as a fish don't you think? VBG 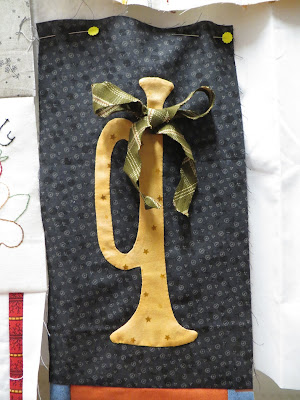 I just pinned that bow on there for the time being.  I'll replace it with something permanent in another color. 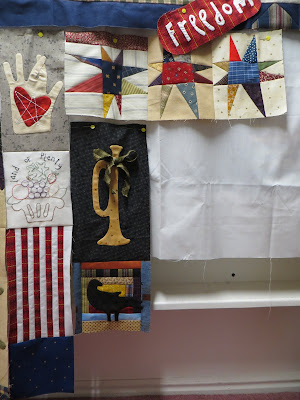 I'll add the word Freedom from the freedom angel block across another section of the quilt. 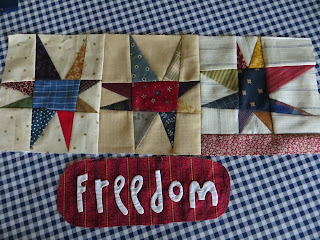 I think I'm finished changing things.  So on to getting my ducks in a row and finishing up this quilt top in the next few months.

I guess that's all,
Robin

one of my UFOs bites the dust

After making my list of UFOs in my last post I was motivated to get busy and finish one of them.  I decided to pick the "Chicken in a Basket" quilt since all I needed to do was fix one of the blocks. 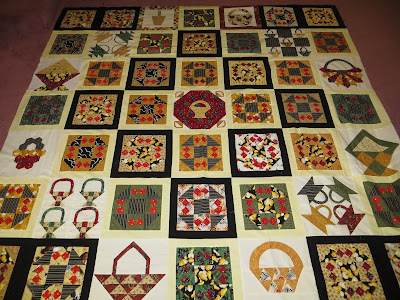 Something that should have taken an hour - two max, has taken me three days because I keep getting interrupted.  That's probably why it wasn't fixed years ago.

The problem was that one of the basket blocks had a black background and if you'll notice all the basket blocks except the center one have light backgrounds.  So I unpicked the block (3rd block down on the left) and replaced it's four corners with snow fabric.  I noticed that it was next to the other basket block with a pointed handle so I had to unpick another block and switch them.  Much better~

It's kind of a quirky quilt with goofy baskets and chicken fabric but it was fun to make at the time.

For some reason I am unable to correct the tiny font in part of this post.  I've tried to do it twice and it's still little.  I apologize.

I'm trying to get some of my UFOs done (as in the quilt in the previous post) and it's taking some concentrated effort to keep from starting something new.

But, now I think I have a better idea of what feels like "me".

I've tried the hard things and some of them are worth the extra effort and time. . . others are not.

Some things are easy for me like "Y" seams or needle-turn applique.  But, there are other techniques that just aren't on my list of things I want to do, like wool embroidery or tedious paper piecing (I'm not talking about hexies, I'm talking about the intricate scenes and still life florals that are sometimes paper pieced)  or working with really tiny pieces or machine quilting.    They are beautiful, they just don't give me as much pleasure when I make them.

I usually make bed size quilts and that can be very time consuming.  I think I'm now satisfied with smaller sizes.

It's a sweet blessing that we can all do different things.  There is such a great diversity of creations out there.  Isn't it fabulous that we all have the freedom to do what we like best.

So, back to the UFOs.  One of the things I do well is finish things.  I can't just let them languish in a closet, drawer, or shelf.  It make take me a while but I know they're there and I know they will get their time eventually.


Here is a list of my current quilting UFOs.  (And a few pictures)
I'm not including the quilt tops that are waiting to be quilted.. 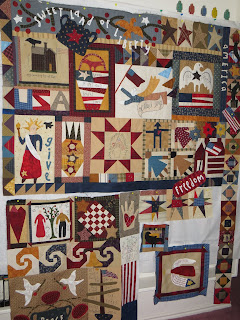 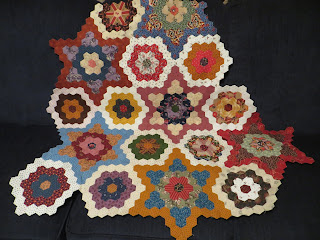 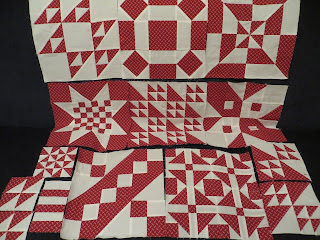 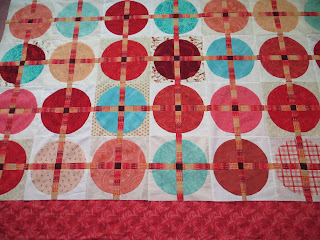 That's a do-able amount, don't you think?  Four of the quilts just need borders.  After appliqueing the Roseville Album Quilt and almost finishing the Sweet Land of Liberty Quilt. . . most of these will feel like 'PLAYTIME".

Thanks for stopping by,
Robin

I have completed all the applique for my Rejoice quilt from the pattern "The Roseville Album Quilt" by Kim Mclean.  It still needs a border but for right now I'm just basking in the euphoria of having the center complete. 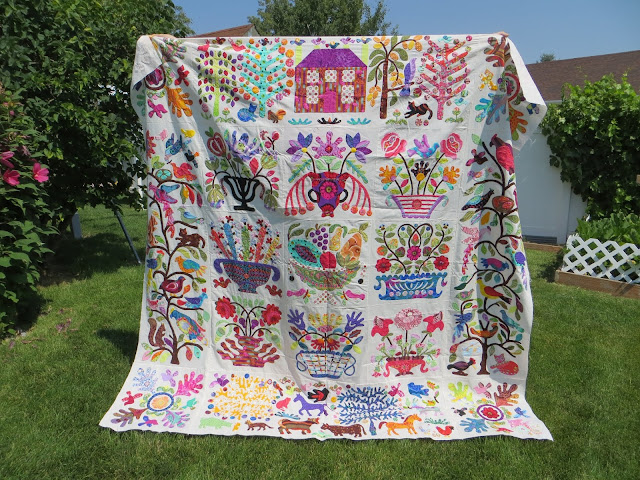 I love the brightness of the fabrics but I have to admit I don't like working on them as much as I enjoy working with fabric that is more subdued like Jan Patek or Jo Morton or CW reproductions.

When I finished the applique, I boxed up all the leftover fabric to give to a friend, folded the quilt top rightside inside, hung it in the closet, and was finally able to relax.  Silly I know but, after all that work I was just ready to be done.

Hope it's not too hot where you are and that you aren't in any fire danger.
Robin