quilts using such bright spring colors.  I'm more of a dark and deep color quilter.  But, it's spring.  At least that is what the calendar says and I wanted something cheerful to put on the wall for the Easter season. 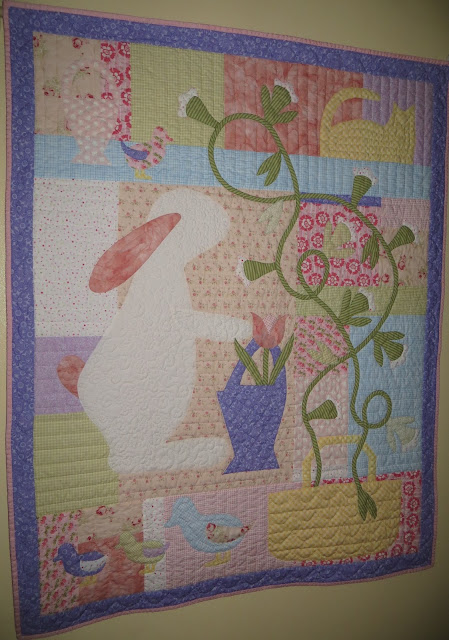 I machine appliqued this in 2014.  After finishing my Christmas quilt during the Christmas season I thought it would be fun to hand quilt another project appropriate to the next holiday.  Although I have a Valentine colored quilt top 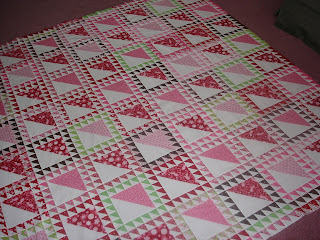 that I could have chosen, I wanted to work on something that would only take a month to quilt and not three. 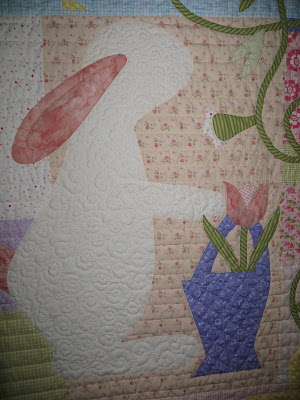 I hand quilted little swirls to give the bunny fur more texture.  I then cross hatched the basket. 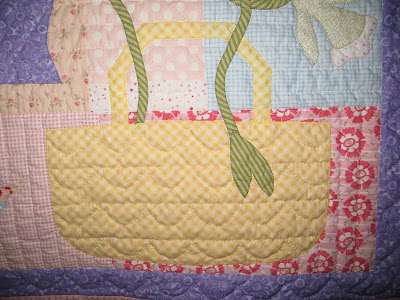 This basket got a little scallop treatment.  It doesn't necessarily look woven but I like the texture the scallops give. 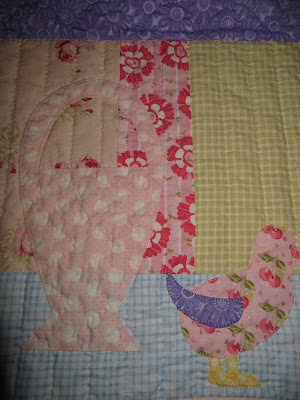 This picture is a little dark but I want to show that the little pink basket got a zig-zag treatment. 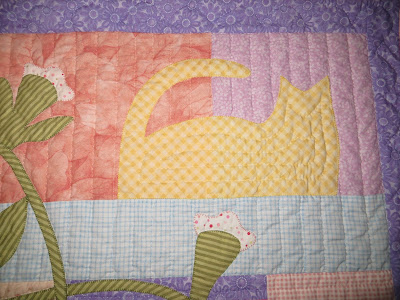 I just did echo quilting for the cat.  It might of been nice to give him a face but I didn't think it would show up. 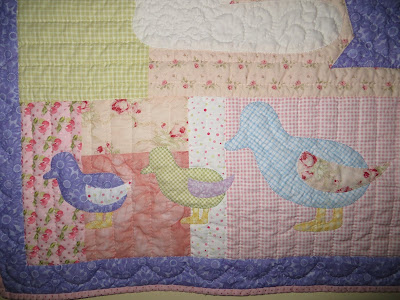 I think my wing placement is a little off for these ducks/chickens but it's a folk art type pattern so anatomical accuracy is not the main focus. 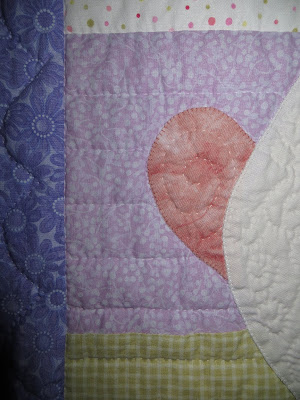 A little swirl on the tail 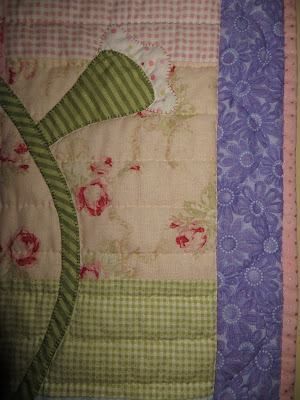 and more scallops around the border and it's done.  AND, it's still four weeks till Easter so the little quilt will be hanging a little while. 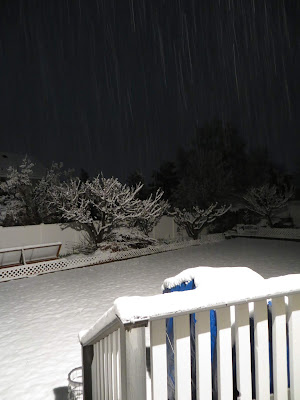 And while we are talking spring I thought I'd give you readers who live in the midwest and east a heads up.  This is what I woke up to this morning and it's headed your way.

I finished the Broiderie Perse! 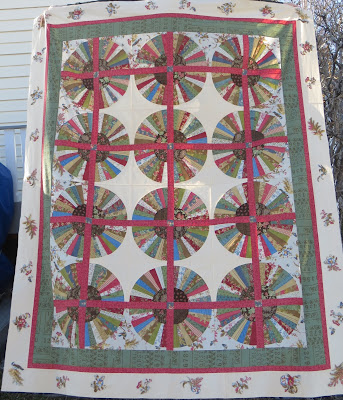 Just wanted to share the finished applique.  This picture is a little bleached out in the afternoon sun.  I'm pleased that it's done and I think it looks much better with the Broderie Perse than without it (below).  I'm surprised at how long it is,  72" X 94".  I wish it was a little wider, 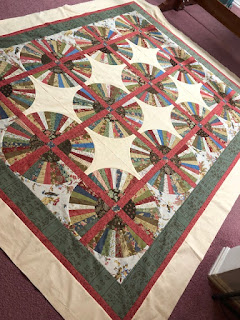 I'm linking up with Design Wall Monday.  Check it out here. 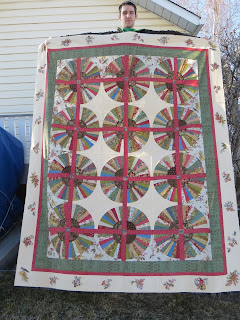 This is the picture before I cropped it.  I had to wait till one of my sons came over to hold the quilt up for me. 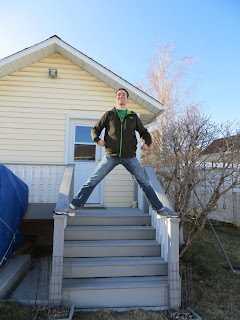 This is where he was standing for the picture.  Gotta love those long legs. 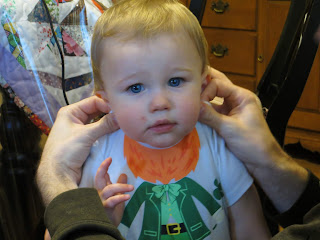 This is my youngest grandson in his leprechaun T shirt for St. Patricks Day.  Cute little chappy face!

When the Adhoc quilters came up with "Mapping" as the challenge last July I was at a loss.  I guess I'm just too literal.  I haven't quite got the improv part of the challenge in hand.

After giving it months of thought I came up with the idea to map out the neighborhood I grew up in.  Then I thought about it some more and remembered that my great grandparents had lived in the same neighborhood 50 years before I did.  The challenge turned into a genealogy project.


I located my great grandparents (and my great great grandmother) on the 1910 Census for Logan, Cache, Utah.  I had heard that this area was called "Little Berlin" at one time because of all the German speaking residents.  The people were really Swiss not German but their dialect called Swizter/Deutch was very German-like.  My genealogy project became finding just how many households in this area spoke the Swiss/German dialect.

The red background/white cross squares are the Swiss flag.

I was quite surprised to find such a large number in this small area.

So I made a small map quilt 21 1/2" X  25 1/2" using the grid of that area, marking streets using the Swiss flag in the intersections, putting in the canal, and sewing buttons (white for Swiss and red for other languages) where the houses are listed on the census.  I thought it would be fun to make a path from my home in 1960 to my great grandmother's home in 1910 using flying geese.

I machine quilted an easy grid, bound it with the same red as the flags, made a label and it's done. 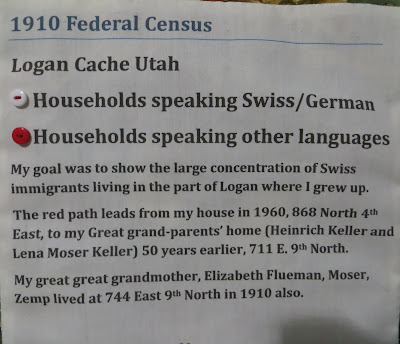 An interesting side note, after my family moved away from Logan, I came back and lived in the same block my great grandparents had lived in while I was attending Utah State University.  Years later my oldest son lived in an apartment house across the street while he was attending.  So that makes six generations that lived in that same small area.

On to the next challenge (or maybe I should finish up the Scale challenge which was before the mapping one -ah!).
Robin

I have been anxious to see what the next project that Gay of Sentimental Stitches would be presenting.  I have postponed starting something new until I knew what she would do.  I have checked her blog weekly since the beginning of January and she finally posted.  She is calling the new quilt "Cheddarback".  The antique quilt that she is copying has a delightful cheddar backing, hence the name.  It is mostly pieced but there are a couple of appliqued pieces I think.

Here are my blocks from Month 1.  I wanted to add a little cheddar fabric just because of the name.  And I really like the design element that the original maker added by choosing a different sashing to go between the outside blocks of the quilt.  She used a pale blue sprig patterned fabric.  I didn't have any blue that would be appropriate and I wanted to use fabric in my stash.  I found this cute little pink sprigged fabric and I think it will add a cute design to the quilt.

I haven't sewed with my CW reproduction fabrics for well over a year.  It feels good to be playing with them again. 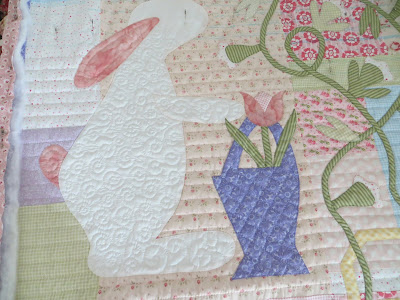 I'm still hand quilting my little bunny quilt.  It's coming along.  It's a good thing Easter isn't till April 21st.  I quilt on it almost every morning but I'm going to need the extra time to finish before the holiday. 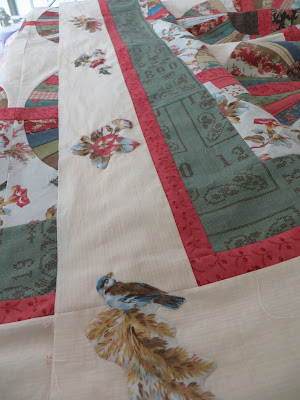 I've been trying to complete the Broiderie Perse motifs around my Wheel of Fortune quilt.  I have to admit. . . I loved making the wheels - so fun, but appliqueing these little motifs is like shucking corn; well worth the effort but no fun at the time.  I'm over half way done but my lack of desire to stitch is making this project last much longer than it should.

It snowed again last night.  That means that the air quality is green so some of the grandkids are coming over this afternoon to roast marshmallows in the fire in the fireplace.  It's always hectic but fun.
Robin