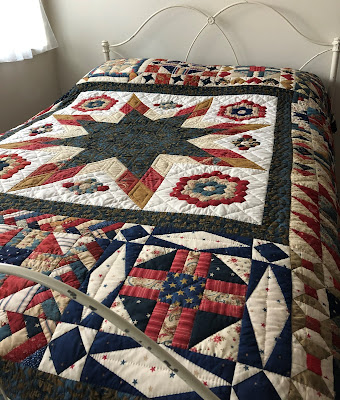 Here is my "Glory" quilt all finished after four solid months of hand quilting. 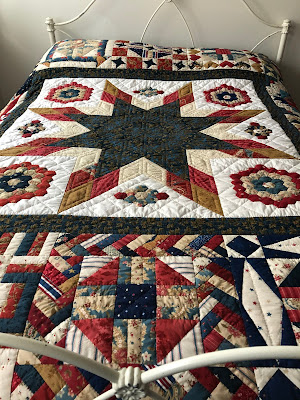 This was a BOM in my quilt group - Bound Together.  We called it 'Block in the Spotlight'.  If you'll notice the center block of the outside squares are all the same pattern.  You chose what you wanted for the center block.  Some used Rail Fence, some used previously made applique blocks, some chose Log Cabin.  It was all up to you.

Then each month we would hand out a different pattern for the border.  We did hearts, hourglass blocks, Storm At Sea, Stars etc.  We only did it for a year so there were 12 blocks.  I chose to put mine together with this center star from American Patchwork and Quilting called 'Shades of Spring' from April 2008.  And, I added the hexagons surrounding the star. 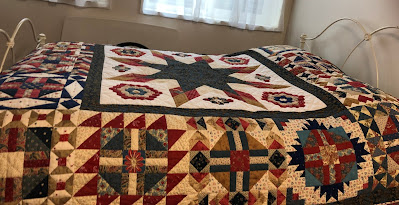 This picture is a little fuzzy but it shows some of the other blocks.  There are 16. 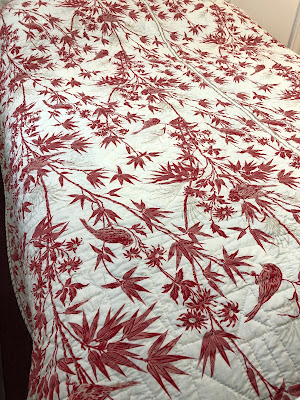 And this is the backing (upside down).  A beautiful piece of yardage from French General that I found on sale.  The quilt measures about 80" square. 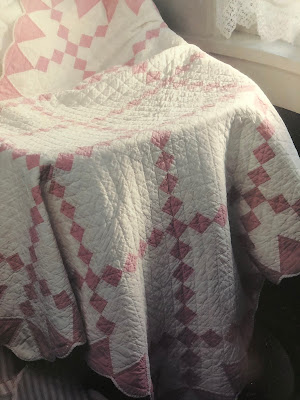 As I was sorting through stacks in my sewing room I came across some fabric I had set aside a long time ago and the pattern for a little quilt above.  It is found in the book 'quick-method QUILTS' by Leisure Arts 1994.  It was my first quilt making book. 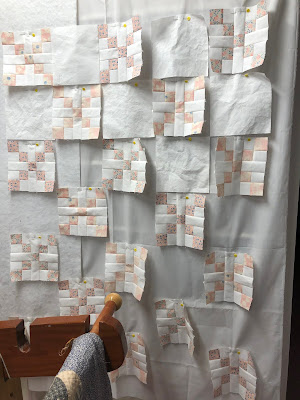 As you can see I'm using a much paler fabric than the original.  It is from the line "Patterns of History" by Barbara Brackman around 2004. 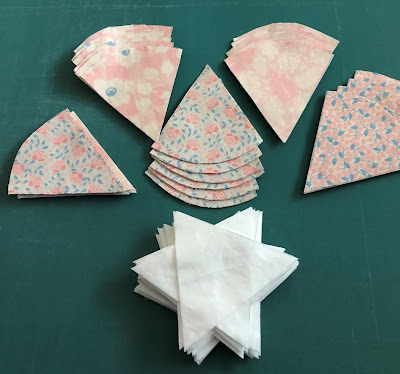 Here is the Ice Cream Cone border all cut out and ready to assemble.  I got lots of yardage on a clearance sale and so I used the lavenders, blues, and greens to make the quilt below.  And I saved the pinks for later. 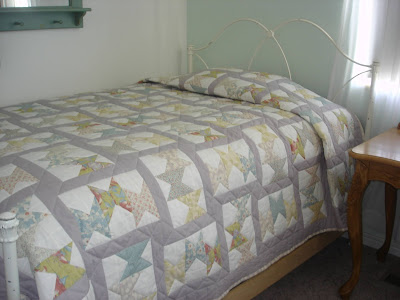 It won't take long to assemble it now and then I can start the hand quilting.  It will be a take-a-long project. 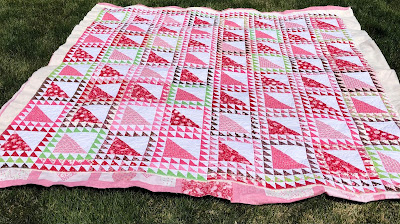 I got my 'Mayfair' quilt back from the machine quilter.  It is made from Valentine fabric by Deb Strain.  Since it is a Valentine theme I named it after my favorite See's chocolate. 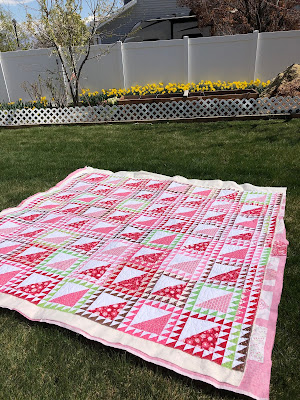 I need to trim it and add the binding and then it will be done after sitting in the closet for a very long time.   I found the top fabric - 2 jelly rolls, on sale at Material Girls. It took quite a while to make all those HSTs.

Then I found the backing fabric from a newer line by Deb Stain on clearance.  So with all this reduced price fabric it would seem like I made a quilt quite inexpensively. . .
But no, the quilt is 85" X 93" and I took in in to be machine quilted.
They did a very nice job and it's not sitting in the closet any more.  I took this top in to be machine quilted because I knew I would never get around to hand quilt it.  I took in another quilt to be machine quilted when I picked this one up this week.  That's two rather complicated quilts that I won't have to dread quilting so I can get to work on the fun ones.
I've decided I need to stop making such big quilts that take hours and days and months to quilt.  Or I need to save my money so I can have someone else do it - ha!
Robin
- April 22, 2021 14 comments: