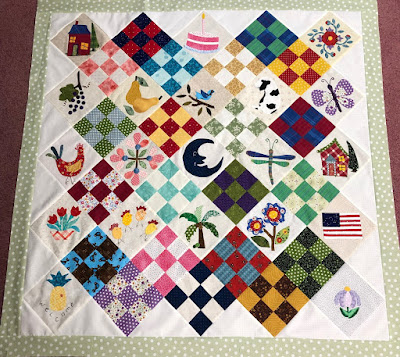 Years ago when the Florence Peto quilts first became the rage, my friend Marlena and I decided to do a block exchange and make our own version of FPs quilt.

We decided to exchange two 6 1/2" appliqued blocks and two 9-patch blocks each month for 6 months.  We did great the first few months and then we slowed down.  I think our big gardens and canning season had something to do with it.

Anyway, she eventually gave me 11 pairs and I gave her 9.  I made a birthday cake block (very wonky) to exchange and I'm thinking the birthday was a significant one.  I turned 60 in 2011 so that tells you how long ago it was.

I'm going to use one of her blocks for my label and one of my blocks won't get used, another weird one . . .

So I have officially finished another UFO to the quilt top stage.  That makes 7 tops completed from my list of 16 UFOs that I made last August.  The original list was 15 but, alas, I found another one to add.  That means I have 9 more to go.  Again, nine sounds a lot better than 16. 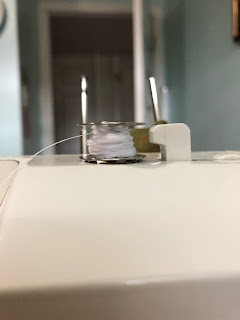 I was in a hurry to get this put together.  The bobbin above proves that when I hurry I always make mistakes.

What a fun, fun quilt, Robin. I love it. I don't know what you have in mind for this quilt but I can imagine it as a baby quilt and toddler/young child being charmed by it. Hurray for you and another finished top!

What acute quilt, I love it. Great work on finishing another UFO!

Sounds like you are pushing through the ufo's really well! It feels so good to be making progress. This one has it's own sort of sampler charm. Will look great as a finish some day!

I was looking at your blog and clicking on suggested posts at the bottom of your current post. I missed this one. There are some cute applique blocks in this quilt. The chicks for one. I like the idea of a one on one trade. Many moons ago, a friend and myself did a trade. We used the same Country Threads quilt pattern and made each other a chicken quilt from it. For some reason, our apple blocks turned out different sizes and more than an inch difference. We never figured that out but everything got fit together into a nice wall hanging size quilt. 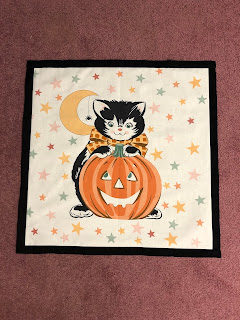