I've been ill.  My Covid 19 test came back negative but I don't know what else it could be, I had all the symptoms.  It was like nothing else I've ever had.  But, I'm on the mend for sure.
This is the view from my bed looking out my window.  Look at all those cute little grapes. 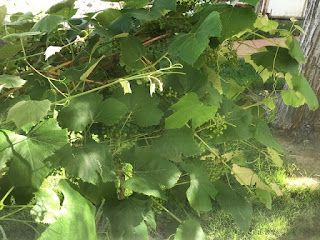 And this is what it looks like from the outside.  It is a concord grapevine wrapping it'self around a little lilac bush that is doing poorly so we decided to let the grapes climb it.
This is really going to be delightful in the fall when the scent of ripe concords waft in on a breeze. 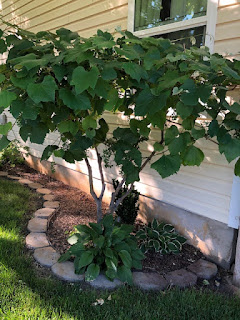 It's a sweet hopeful view that things are still thriving.
I'm back to the sewing room and frames so I know I'm feeling better.
Robin
- June 24, 2020 9 comments:

In my happy place 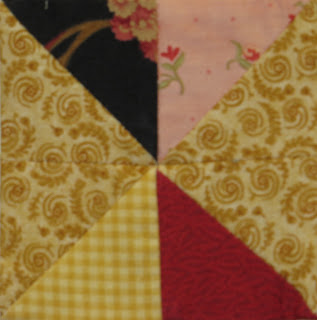 Sorry this is a little blurry.  This certainly isn't what I was entering my sewing room to work on.  I have an under-the-bed box full of old scraps that I really want to get rid of.  Well, get rid of by putting them in a scrappy quilt.  I even had one particular fabric (that I've always called the "Godzilla" fabric) that I was going to cut up first thing.

There were several items on top of the box that had to be removed before I could open it up.

One of the stacks had the leftover HSTs from my previous project below. 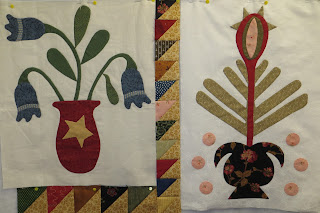 I began thinking hourglasses because that is the current prompt for the Improv group.

So I assembled them together to make hourglasses and had just enough for 9 blocks.  Then I wanted to put a lighter sashing between them but decided that just a solid color was kind of boring. 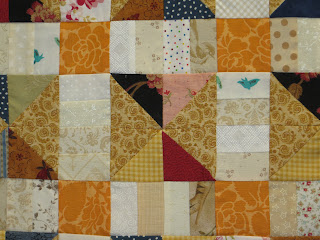 So I put various 1 1/2" X 2 1/2" rectangles around them and then added four corner stones.  Orange is not really the color I had in mind but I wanted to do something different and the orange adds some needed vitality.

Using orange made me think of the alphabet fabric I used for backing a couple of months back that had an orange grid to it.  So I put a small 1 1/2" border around it. 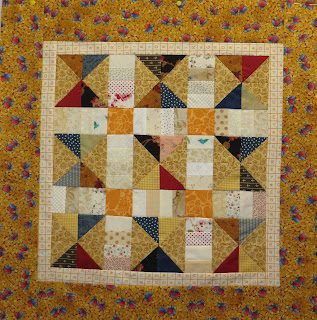 Then I wanted to repeat the gold from the hourglasses and I came across this outside fabric that is from The Quiltmaker's Gift line 2002.  It has little birds on it and added some whimsy to the little quilt.

The next border is going to have words on it, both to repeat the letters in the first border and then it's always fun to put a message on quilts.

So, I still haven't dipped into the scrap box and ""Godzilla" is safe for one more day - ha!