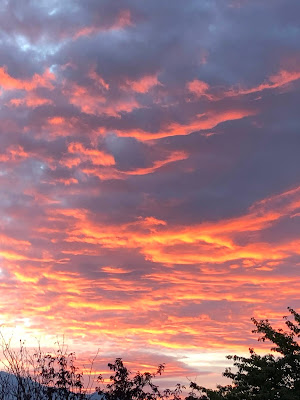 This is what I woke up to.  Isn't it gorgeous.  The whole eastern sky was engorged with colors like this. 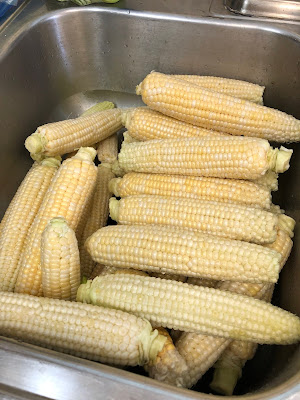 We had a hard freeze warning for today so that meant it was time to harvest whatever was left and bring it inside.  My husband and daughter picked the corn that was ripe enough to use.  If  it froze at the end of October like it usually does, we would have had two more weeks for the corn to ripen.  But, snow was coming and during a drought like we've had, I wasn't going to complain about some long needed moisture. 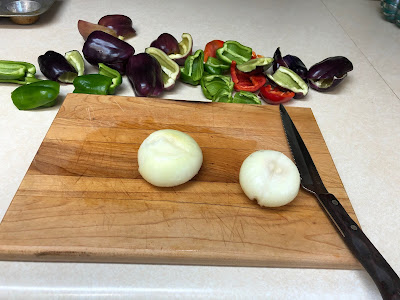 They also picked all the peppers in varying states of ripening.  Actually, all the green peppers you see in the picture are unripened red peppers not bell peppers so the flavor was minimal.  But, I had enough for my goal of making corn relish, one of my favorite things.

I got all the peppers washed and chopped as well as the onions.  The funny thing about the purple peppers is that they look beautiful when raw and they have a wonderful crunch but, there is no flavor.  It's kind of disappointing.  We won't be buying that variety again. 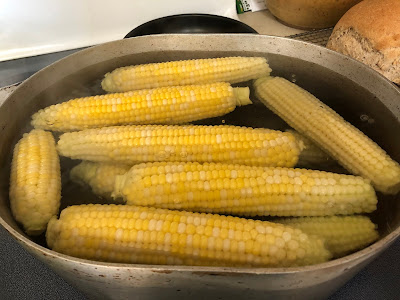 My husband and daughter husked the corn.  My husband says "husked" and I say "shucked".  I guess it's just where we were raised.  What do you say?

Then the ears were scalded and dipped in icy water. 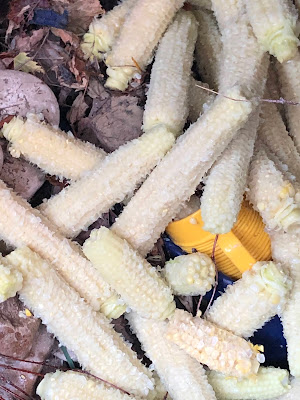 Soon, the corn was cut off the ears (my least favorite part). 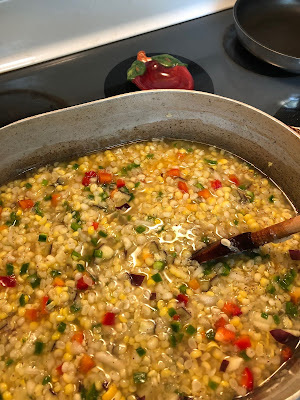 And everything was mixed together to boil i.e. corn, onions, peppers, spices, vinegar, sugar, pickling salt, and a little water. 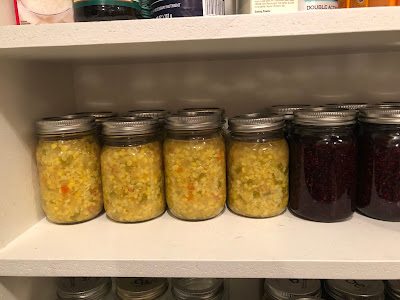 Then I put it the hot relish in 7 pts and processed them.  Lids are hard to come by this year and I had saved a few for just this very purpose.  The pints aren't as pretty as last year because I had less red pepper and it's not quite as flavorful as last year because I didn't have any green bell pepper.  But, I'm so grateful to have these 7 pts.  I'm going to really enjoy the relish as the year proceeds. 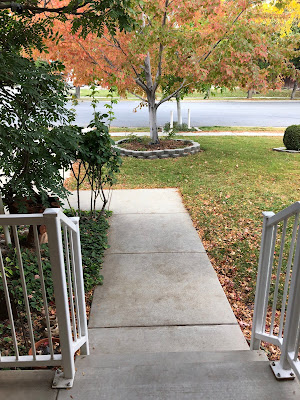 Thanks for stopping by,

What a beautiful sunrise! Glad you were able to harvest all the veggies before the frost. We say "shuck" here in Maine. And, I agree with you, I don't mind shucking the corn but I hate scraping it off the cob. I much prefer rolling the cob in butter and chewing it off myself. Hard to make the relish that way!

Peel or clean the corn

You have been busy "putting up" as my Grand-mere used to call it;))
That corn relish looks amazing.
And what a fantastic sunrise...it sure starts off a day in a beautiful fashion to see something like that--a gift for sure...
hugs, Julierose

Gorgeous sunrise, Robin. Did you wake up to snow this morning? We had snow and power outage for several hours. Hubby even dragged out our big battery after a few hours, thinking we ought to plug in the fridge. Then the power came on. But there was snow and downed tree limbs everywhere!
Your relish looks yummy. I say both shucked and husked, but I can't do the job myself no matter how you say it, because it causes a bad allergy flare. So I usually end up cutting the corn off the cob. But we haven't grown corn for several years. The raccoons and skunks were getting it all before we did, in spite of everything we did to prevent it.

A fantastic sunrise and a productive time making your relish. What treasures to have to enjoy for months to come. We say "shuck" the corn. I'm with Wendy - corn on the cob for the win;). That is interesting about the peppers.

I guess we'd say 'husk' over here, but I like 'shuck' much better. How lovely to have all those jars lined up and waiting for the winter.

The sunrise is beautiful. When I see those colors (yellow, coral, and lavender) together in the sky I think they are perfect but if I were to put fabric of those colors together--not so perfect.
You were certainly busy with all your canning the other day. I think I would have done my best to eat that corn fresh--because I'm not a big fan of relishes--but I know you and your family will enjoy it this winter.