I sneaked a little project in

Not much going on here.

I work 5-6 days a week on the quilt on the frames (in the column on the right).  I've been hand quilting it for almost 3 months so far.  It's turning out great.  My fingers and wrists. . . not so much.

I banned myself from the sewing machine for the month of February.  If I'm ever going to catch up quilting the closet full of tops, I'm going to have to stop making them.  (Where's the fun in that?)

I decided to make a small quilt this month.  Just something I could do a little at a time, no pressure.  And I would only let myself work on it after I had done my daily stint at the quilt frames.

This is what I came up with. 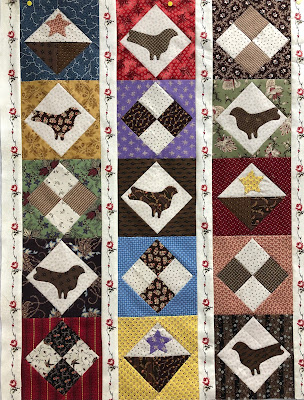 It's from a pattern called "Brown Bird" by Renee Plains that I bought when I first started quilting in the early century. I've been wanting to make this and the pattern has been up on my cork board for the longest time. . .

I was going for a more primitive look with browns and neutrals.  I picked from my stash and got busy.

But, it was really ugly, no diluting the truth!  Even my friends, who were trying to be nice, had nothing good to say about it.

So I gave it some brighter colors and now it has an Easter Egg feel to it.  That wasn't my goal but it's appropriate for this time of year.  I'll go with it.  I'll quilt it by machine around the squares and by hand inside of them.  No hurry, I'm still concentrating mainly on the quilt on the frames.

Your little small quilt is just adorable--it is just perfect for Easter
my hands are in resting mode right now...hugs, Julierose

This is so precious, Robin. Love the sashing. I think it still looks vintage, even with the pops of color! Nice to take a break now and then from the things we are "forcing" ourselves to finish and just create some little thing for fun!

This is so sweet, your little additions of a few brights adds so much to the whole. It says spring without screaming it from afar.

Sweet little quilt,Robin. I agree it looks totally vintage. So glad you have your vaccines. Happy stitching from me!

I think it's really sweet and something fun and (relatively) quick to break up your longer stretches at the quilt frame.

Oh my, that is so very sweet! I would love to link it up with our monthly mini quilts at the end of the month if that is o.k. I just love it!

What a sweet project! Love your sashing print especially. It's really rough when our friends don't even have something encouraging to say about a project! Looks like you rescued it perfectly!

Brown Bird is sweet, sweet! I have a couple patterns from this designer but I don't think this particular design.

I think it's lovely and particularly like the effect that the vertical sashing gives!

What a sweet quilt, Robin. I can't imagine what your friends didn't like about it before you put it together with this sashing.
Isn't it hard to stick with hand quilting when there are so many other quilts to be made and so much fabric at hand? It is for me!