As the flowers bloom, so does the quilt 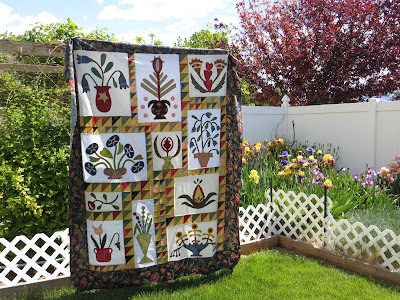 I finished Linda Brannock's Flowers quilt top last week.  This is the first chance I have had to photograph it.    The border is hard to see but the quilt fits right in with the blooming going on in the corner of our yard.  The garden gnome (DH) holding up the quilt is not quite tall enough to spread out the border and still keep it off the ground.  He is precariously standing on the lower wooden part of the fence.

His boysenberries are going to town on the left and the iris' are marching in a parade of color on the right.  Too bad you can't see the blooms behind the quilt. 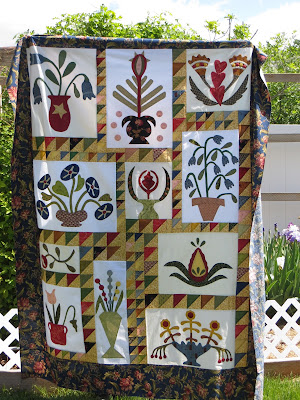 I didn't add the pieced baskets like the original pattern.  I made a cutting of a rose and put it on it's side in that smallest block above the tulip.  You can see that little block better in the first picture.  I think it might need another leaf? 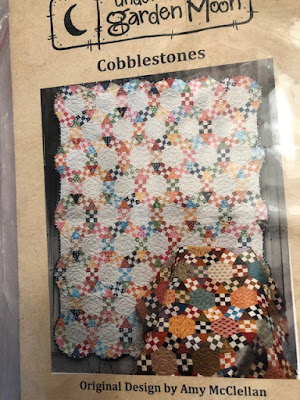 Since I finished that project (in 2 months) I decided to get out an old UFO.  It's not as old as some others but it's been about 2 years since I worked on it last.  I've always wanted to make one of these quilts (the block is called Jack's Chain) so finishing this up is a good idea. 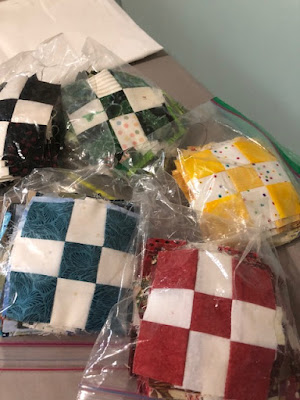 I wanted to make each 9-patch with a different fabric.  I still need to make 16 purple and 16 orange patches and I've started cutting them out below. 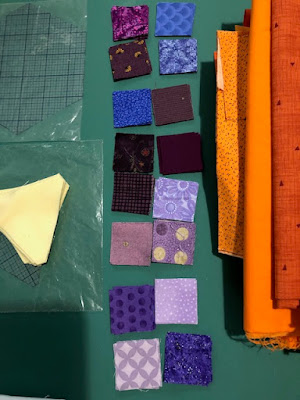 I think I want to use this soft yellow (the triangles are cut out) as the background.  I'll try a few circles of 9-patches  and see how it looks.

I've finished quilting the quilt on the frames (sidebar) and am putting on the binding.  I quilted it in a two inch grid.  At some point the grid got a little wonky.  Drat!  I tried to fix it but, short of picking out the diagonal from upper left to lower right on the whole quilt, it will just have to be wonky.  I blame it on the pandemic. . . 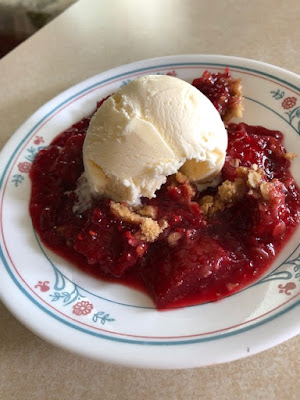 The rhubarb has been harvested and I made a raspberry rhubarb crisp.  Delightful!

Don't you think rhubarb is a funny word?  It is late middle English, from old French "Reubarbe", and that is from Latin "Rheubarbarum".   More than you wanted to know~
Robin
- May 21, 2020

Your quilt top is wonderful, Robin. Really nice job--and nice of hubby to put himself at risk for an injury to hold it for a photo shoot. LOL
Your iris are beautiful--mine have done remarkably well this year, too. I am a bit surprised considering it was the driest April on record and the first half of May wasn't much better. I haven't gone out and watered a thing yet.
Oh, Jack's Chain has always intrigued me, but not enough for me to think I could do it. I am excited to see this come together.
We were offered some rhubarb the other day and at first hubby said yes, so I would make a crisp. But we are both trying to lose weight, so he reversed his decision, since we only eat it smothered in ice cream. Neither one of us needs that right now. And to think as a child I used to love to eat rhubarb fresh from the garden, dipped in salt. Yikes!!

That is a spectacular and beautiful quilt, Robin!! I love the little rose on its side...so whimsical--adds a personal touch, I think...:))) Such nice work you do...

My irises are stubbornly still in tight buds--well, can't blame them as it is C O L D
here for May really..upper 30's at night and only low 50's daily...
My azaleas though have been and gone...not much happening but green shoots in my little
garden sections. Our backs prevent us from any extensive gardening and we miss it a lot...'

Stay safe...~ ~ ~ waving with my afternoon tea in hand Julierose

Your flowers quilt is delightful, Robin. I love the changes you made. Are the sizes (and the finished size) the same as in the original pattern? I ask because it seems bigger. I like your idea of a flowered border. I need to pull mine out one of these days/months and finish it.
Your flowers look beautiful in the background. I love iris.
I know your Jack's Chain will be wonderful. The one block similar to it that I made for Cheddarback was enough Jack's Chain for me! Too many Y-seams!
So sorry for your uneven grid on the quilt you just finished. I suspect that only you will notice it after it's bound, washed, and dried. That's a wonderful quilt, too.

Your quilt is beautiful! Isn't it nice to have our own blooms in the garden? This time of year goes by so quickly I need to be outdoors if the sun is shining. We live in the forest so don't really have a yard but I have pots here and there and keep my fingers crossed.
Rhubarb with raspberry! I never would have thought! Rhubarb with strawberry seems to be the going way but we're purists and don't mix any other fruit with it. I will go sometime this weekend to get more. I bake the crisps and then put them in the freezer so come winter they are ready to just thaw. We like them with ice cream but I'll eat it without mostly. When we were kids my brother and I ate it raw from the plant - no salt, just the plant. In the very early days it was used medicinally as a diuretic and not as a food, much less a pie!
Thanks for stopping by. If we can figure out how to do email exchanges I can comment back to you that way.

Your Flowers quilt looks very pretty displayed in front of the flower bed.

At one time, I thought about making a Jack's Chain quilt. I don't remember what got me interested but it didn't happen.

This picture is a little light but it shows the 2" grid quilting. I finished the quilting on the little 1857 quilt from a SAL in ... 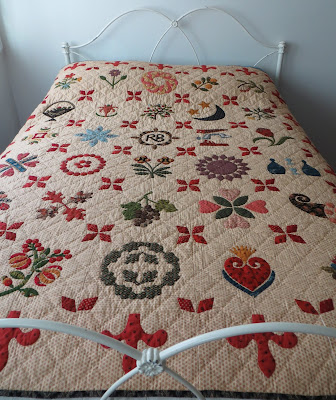 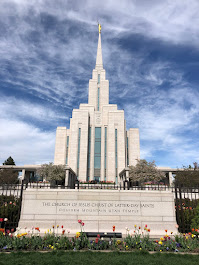 Quilt on the frames 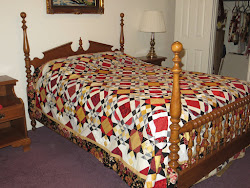